A visitor arrives at a remote castle and is disturbed by the portrait of a young woman. As her husband painted her, the picture came alive - while she lived on only in his art...

First performances in association with The Opera Box at The Brunel Museum, London and The Croft Hall, Hungerford, in September 2017

The Oval Portrait has a surreal quality which examines the territory between life and art. Not a drama in the normal sense, with dialogue between characters, for example, but a story told through the medium of song. 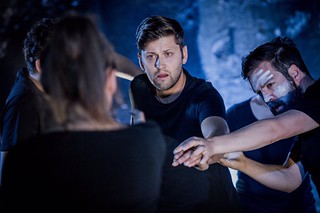 The chateau into which I had ventured

was a pile of commingled gloom and grandeur

which to all appearance had been lately abandoned.

I found myself in a remote turret of the building,

whose decorations were rich, yet tattered and antique.

Its walls were bedecked with a great number

to the contemplation of which

the light of a tall candelabrum

allowed me to resign myself.

Long and devoutly I gazed

until I suddenly glanced in vivid light

a portrait of a young girl

I closed my eyes to make sure

this vision had not deceived me.

In a few moments I again looked up.

That I now saw aright

I could not and would not doubt:

as a thing of art,

nothing could be more wonderful than the painting itself.

But it was neither the execution of the work,

nor the immortal beauty of the countenance

which had so vehemently moved me.

I had found the spell of the picture

in an absolute life-likeness of expression,

which, at first startling,

finally confounded, subdued and appalled me.

With deep and reverent awe, I perused a small volume placed nearby

which discussed the painting and its history.

These were the words I read:

She was a maiden of rarest beauty,

not more lovely than full of joy.

Evil was the hour when she saw,

and loved, and wedded the painter.

He, passionate, wild and moody,

and having already a bride in his Art;

she, all light and smiles, loving and cherishing all things.

The artist soon spoke of his desire

to portray his young bride;

she was humble and obedient, and sat meekly

for many weeks in the dark turret-chamber

withered the health and spirits of his bride

who pined visibly to all but him.

Yet she smiled on and still on,

because she saw that her husband

took a fervid and burning pleasure in his task,

and wrought day and night

to depict her who so loved him,

yet who grew daily more dispirited and weak.

And he would not see

that the tints that he spread upon the canvas

were drawn from the cheeks of her

who sat beside him.

Those who beheld the portrait

spoke of its likeness as a mighty marvel

and proof of the artist’s deep love for her

whom he depicted so surpassingly well.

And when but little remained to do,

save one brush upon the mouth

and one tint upon the eye,

the spirit of the lady flickered up as a flame within the lamp.

The brush was given, the tint was placed;

and for one moment the painter stood

entranced before the work which he had wrought;

crying with a loud voice

‘This is indeed Life itself!’

he turned to his beloved:

And, as I read how the last brush stroke

and the last tint had taken away the life of the lady of the oval portrait...

So let it be now

that you who have read these words

and have gazed on the portrait of the lady